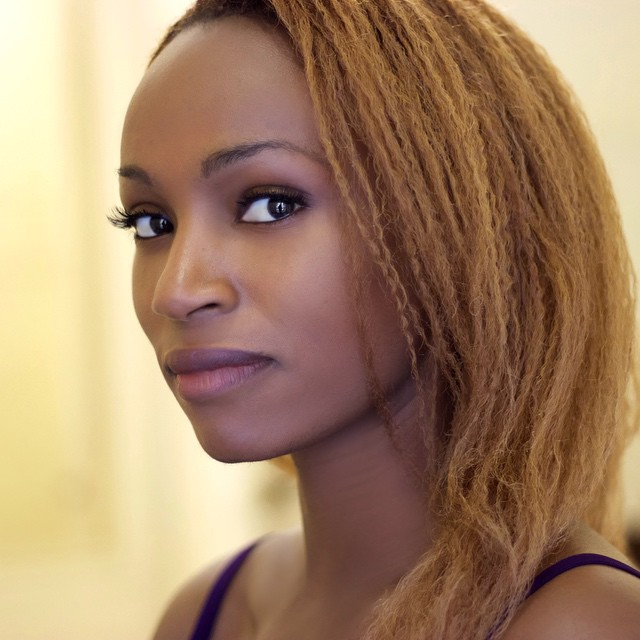 WHERE ARE YOUR RIGHT NOW AND HAVE YOU ALWAYS LIVED THERE?
I am in London right now. I am bi-coastal between London and New York.

WHERE WERE YOU BORN AND RAISED?
I was born in Nairobi, Kenya and moved to London as a child. I feel like my cross cultural upbringing has given me a sense of adventure.

WHAT'S THE BEST THING ABOUT YOUR CITY OR HOMETOWN?
My hometown is London. It’s where I spent my formative years. London is truly magical and at the core of its beauty is the cross cultural elements and integration. You can get the best of the world, culturally and historically in London. We're also a nation that just "gets on with things" in these difficult times. I love my home town.

WHAT WERE YOUR INFANT ASPIRATIONS?
I never really held on to a single aspiration in terms of a profession. I wanted to be a teacher for a short period of time, then a doctor, even a nun. My drive was really to do well at school so I could become whatever I wanted to be.

WHY THESPIAN?
Oh, that’s an interesting question. When I was about 11, we moved house and I joined the school late. The school play was already cast but this was a particularly large celebratory show and the whole class was asked to participate. So I was cast as the snake dancer in Aladdin (totally made up character.) We were privileged enough to perform at the Theatre Royal Stratford, with full technical aspects. I was on stage for about 30 seconds and as the lights hit me, I was in absolute bliss. It was as though someone had sprinkled fairy dust in the air. I felt such a strong sense of belonging and all I could think about as I watched from the sides after my appearance, was how much I wanted to be back on stage. I suppose my changeable nature with regards to my profession as a child stems from my desire to be everything for a short while. Being a thespian perfectly fits the bill. Since then, it has somewhat expanded to all aspects of production namely writing, producing and performing.

WHAT IS YOUR BACKGROUND TRAINING?
I went to drama school, The Royal Academy of Dramatic Art in London. Before that, I went to Guildhall school of Speech and Drama (youth class) for a couple of years and I also spent a term at Silvia Young Theatre School- Saturday class.

HOW DO YOU PREPARE FOR A ROLE?
The process is different with every role but one thing remains the same, it all stems from the text. It’s simply a case of picking up as many clues regarding character and using my imagination to play and manifest the character. Some roles are more demanding than others and I adjust my daily routine to enable that character to resonate.

WHAT IS YOUR PREFERRED CINEMATIC GENRE?
Cinematic genres resonate in the same way as music genres to me. There's a genre for every mood and moment. It would be difficult to name my preferred, however, I would say the essence of a rounded story with great characters that illuminate an aspect of the human experience is key in any narrative.

WHAT OR WHO HAS HAD THE GREATEST INFLUENCE ON YOU?
Influence is akin to inspiration, I am grateful to have been moulded and shaped by many aspects and people in my life. Each project brings its own set of influences, from personal experience to an acute observation of our behavior as humans. I'm currently working on "Scoot", a feature film about an American guy who looses his fathers ashes and goes on a crazy taxi journey to find them. He shares the ride with an Arab lady who's carrying an unusual gift from her husband.

HOW DO YOU SPEND A DAY OFF, ANY HOBBIES?
Ha! I haven’t had a full day off in months! I’m due one now. If you want to know the truth, I would sleep in and wake up seriously late. Then leisurely mosy to my favourite vintage and flea markets. Sample delectable dishes and watch a dance show. After which I would go to a salsa bar and dance the night away. I love to dance, its so vital to me. I’ve been dancing since I was a child.

HOW DO YOU GET RED CARPET READY AND HOW DOES YOUR AESTHETIC TRANSLATE IN OTHER AREAS OF YOUR LIFE?
Fashion is a core part of my self expression. Texture, silhouettes and colour become a playground. The red carpet is the perfect place to curate a look that brings together this part of my expression. I am grateful to be working with Ruth Higginbotham my stylist, who is incredible. We communicate often and send ideas back and forth for various events and press appearances. As for my day to day style. I love to mix vintage and young designers. I love a good find, a one of a kind timeless piece that excites. I recently saw Anselm Kiefer’s exhibition at the White Cube in London and the structural elements in his sculptures have seeped into my day to day style.

WHAT BEAUTY ROUTINE DO YOU SWEAR BY?
As my days are varied, I can go from rehearsing in nothing but a moisturiser during the day and then hit a red carpet event in the evening. Exfoliating and drinking lots of water is vital to my daily care. I also recently discovered Glossier Perfecting Skin Tint and Cloud Paint. They really are the best things since sliced bread for a girl who loves her make up to look like second skin. I am also loving Mario Badescu Rosewater Facial spray, it hydrates and refreshes with or without makeup and I literally can’t live without. Caudale Overnight cream is really the secret serum that I use after a long day on set with heavy makeup. As for scent it has got to be 'Still Life' by Olfactive studio, it is simply heavenly.

HOW DO YOU STAY IN SHAPE?
I do everything. Run, circuits, dance. I prefer group sessions to solitary workouts.

HOW DO YOU UNWIND? It's funny, I recently thought about this. I have to say I love to clean. It's crazy I know but it really helps me unwind and relax. It’s simplicity is almost meditative and refocusses my thoughts. It is the perfect antidote to my busy mind.
Posted by Ellinor Forje