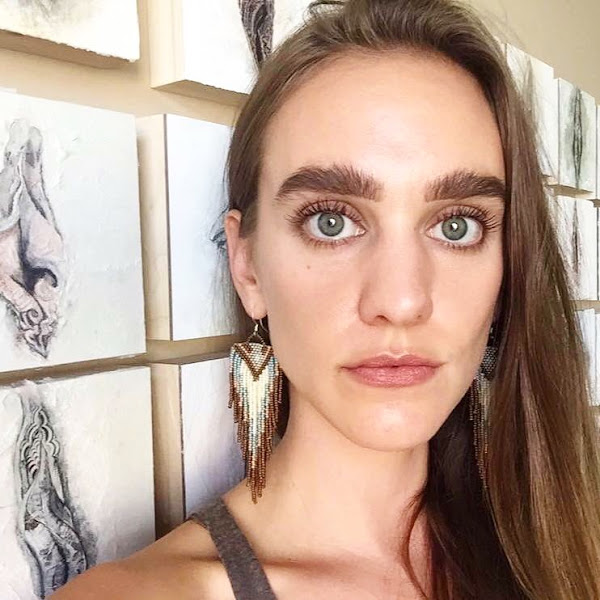 WHERE WERE YOU BORN AND RAISED AND WHERE TO DO YOU PRESENTLY LIVE?
I was born in the historical Gold Rush town of Placerville, California and raised in Pollock Pines, California. I currently live in Salt Lake City, Utah.

WHAT’S THE BEST THING ABOUT YOUR CURRENT CITY OR HOMETOWN?
Pollock Pines is a small town at the base of the Sierra Nevada Mountains and is also known as “Nature's Wonderland”. I spent summers and weekends boating, rafting the american river, and panning for gold in Coloma, the birthplace of the California Gold Rush. I loved growing up in an area surrounded by historical significance and natural beauty.

WHAT WERE YOUR ASPIRATIONS GROWING UP?
I wanted to be an archaeologist and treasure hunter growing up.

WHAT HAS BEEN A PIVOTAL MOMENT?
Having my work featured and purchased by others has been super exciting.

WHY ART?
I had turned to art as a way to help myself heal from Body Dysmorphic Disorder, which I had developed after moving to Utah. Art is a universal language and I felt that if I could help even one or two other women to love and to accept their bodies, then I would continue to produce. Art is very therapeutic.

WHY VAGINAS?
Initially, I never intended to make this project public or political. The decision to paint vulvae began as an entirely personal way to help myself cope with some of my own struggles. After sharing a few early paintings with my close friends and family, they responded by sending me photos of their own bodies to reimagine in my art, and encouraged me to make the project public. Now, I have had women from all around the world: friends, family members, casual acquaintances, and total strangers contribute as models for my work. I’ve had dozens more, men and women, contact me, some publicly and some privately, expressing gratitude for the way this series helped them to see beauty in the human body. Similarly, many of the models intimated that by sending me photos of their bodies, they wanted to overcome their fears and insecurities. Painting vulvae, focusing on details of women’s bodies, even the parts that are “supposed” to be hidden, does sometimes feel like a small act of resistance, a way of saying that women don’t need to hide, that we deserve a place, not just in the art world, but in every sector. I’ve been greatly encouraged by the positive responses to my work, but, honestly, the negative comments have done more to motivate me to continue working on this series. They prove that now, even in 2017, women’s bodies are a site of conflict. Really, no matter what tone those comments take, I see them all as an attempt to silence women, to invalidate how they look, what they say, and how they exist in the world.

HOW DO YOU GET AWAY WITH POSTING PRIVATE PARTS ON INSTAGRAM?
I think because they are artistic representations of private parts. I portray vulvae as they are: integral elements of the natural world we are a part of. The beauty, the strength, the very survival of nature depends on diversity. So too with humans.

WHY ARE VULVAS RARELY APPRECIATED (BY MEN) IN AN ARTISTIC SETTING BUT ADORNED WHEN THE SPACE IS PORNOGRAPHIC?
Even today, despite the prevalence of female nudes in art museums, despite the accessibility to pornography, there is still tremendous pressure on women to hide themselves, to be ashamed of whatever doesn’t conform to societal standards of beauty and propriety. It’s part of this strange dichotomy that culture has created for women: reveal and conceal. On one hand, we’re always supposed to reveal enough of ourselves to be sexually attractive, but simultaneously we’re expected to conceal our bodies, our opinions, and, ultimately, I believe, our power. Some of the most vociferous opponents of my art (especially in Utah) are those who say it’s pornographic. I find this to be somewhat ironic, since the vulvae in porn tend to look very similar.

A few years ago, I was shocked to learn that in Australia, any visible sign of the labia minora is “offensive” and has to be edited out to be deemed “appropriate” enough for soft porn. It’s part of that insane dichotomy, right? Reveal and conceal. Reveal your labia majora (sexy!) but not your labia minora (disgusting!). And that becomes a vicious cycle too. If men and women only see this one specific version of female genitalia, then they start thinking that there’s something wrong with anything that doesn’t conform to that. Increasingly, too, women are getting labiaplasty, a surgery where bits of the labia minora are sliced off with a scalpel. Titling my series “Diversity of Nature” pushes back against the photoshopped ideal of beauty. It’s a really unapologetic look at what is truly “normal.” Whether you view the paintings in a gallery or scroll through them online, it’s impossible not to see the incredible individuality of each vulvae, and, I hope, to see the beauty, the strength, and the power of the female body.

WHAT’S YOUR BACKGROUND TRAINING?
I received a Bachelor of Fine Arts degree from Utah Valley University.

WHAT'S INTEGRAL TO THE WORK OF AN ARTIST?
Vulnerability.

WHAT IS YOUR FAVOURED MATERIAL AND TOOLS TO WORK WITH?
I work with mixed media: watercolor, acrylic and collage.

WHAT INSPIRES YOU ON A DAY TO DAY?
Mother Earth, feelings and womanhood.

HOW DOES YOUR AESTHETIC TRANSLATE IN OTHER AREAS OF YOUR LIFE?
Growing up in the woods has made me very casual, comfy/cozy and I’d say “woodsy”.   My home is filled with shrines of plant, herb and a lot of art!

WHAT DO YOU GET UP TO WHEN YOU’RE NOT WORKING? HOW DO YOU UNWIND AND STAY CENTERED?
I love to garden, go camping and play Kubb with my partner. I also raise chickens and angora rabbits. Whenever I need a break, I play with my animals outside.
Posted by Ellinor Forje